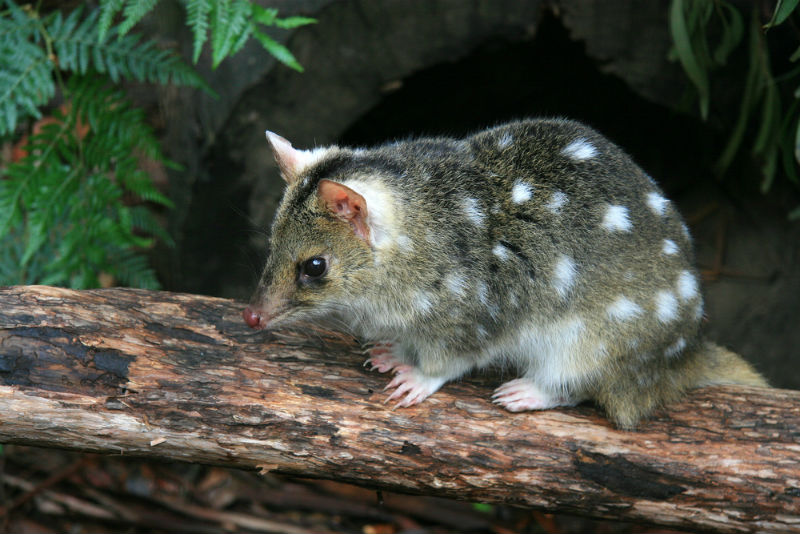 It’s not a whale or a dolphin, but the Eastern Quoll is just as fascinating and has a unique conservation story. Last week, 60 years after the eastern quoll was wiped out by foxes on the Australian mainland, twenty of these carnivorous marsupials were released into Jervis Bay’s Booderee National Park. This is the first time that a carnivore, extinct on mainland Australia has been reintroduced into the wild. So, how are they doing? Let’s find out.

A Brief History of The Eastern Quoll

The Eastern Quoll is roughly the size of a cat, with a thick, soft brown coat and a rather cute face. Distinctive white spots cover all of its body except for the bushy tail. This nocturnal marsupial has impressive hunting skills and likes a varied diet including insects, fruit, mice and rats.Hunted to extinction (the last sighting of a quoll on the Australian mainland was in Vaucluse in the 1960’s) by their chief predator, the fox, the quoll has survived in Tasmania thanks to its fox-free status.

What’s Next For The Eastern Quoll

“because of its naturally protected peninsula, and as one of the most intensively controlled areas for foxes in Australia over the past 15 years.”

The quolls will be closely monitored via specially fitted GPS collar trackers and motions sensor cameras that have been installed on trees. The aim is for the colony of 20 to increase to up to 120 over the coming years, and hopes are while the situation is fragile, hopes are high. Quolls can produce a litter of about 6 babies a year, and these quolls have been genetically bred in Tasmania (at the Tasmanian Quoll Conservation Program sanctuaries Devils@Cradle at Cradle Mountain and Trowunna Wildlife Sanctuary at Mole Creek) to cope with the NSW South Coast climate.

Reports so far are positive, with the quolls keen to explore their new home and not moving too far. According to the founder of Devils@Cradle breeding facility and animal sanctuary, Wade Anthony, the first two weeks pose the greatest risk to the relocated animals. So we’re all crossing our fingers that this ambitious plan is a success and we can’t wait to see the impact this curious animal has.

“For thousands of years eastern quolls played a part in the ecosystem as primarily insect-eaters. It will be fascinating to see what happens when they return to that role at Booderee”.

Visiting Jervis Bay? Exploring beautiful Booderee is an absolute must, especially if you love wildlife. Whale season is nearly here and you might be lucky enough to spot one from the shore, or take a whale watching tour in Jervis Bay with us to see these majestic creatures close up.