Bottlenose dolphins are one of the most beloved of all creatures. Around the globe, people flock to see them: to watch the dolphins swim, play, and live. There’s no doubt that dolphins are amazing animals. They demonstrate an uncanny ability to communicate amongst themselves and show strong signs of a keen memory and a high level of intelligence. People love dolphins, and with their beautiful appearance and seemingly “smiling” face, it’s easy to see why.

Dolphin research has been going on for decades, as scientists strive to understand even more about these fascinating, majestic mammals. Among the topics given attention and research is the question of whether dolphins, like humans, have the ability to love?

To determine whether or not dolphins can experience love, or a sensation like love, first it must be established whether or not dolphins can feel emotions. An increasing number of scientists seem to think so. Biologist Philippa Brakes of the Whale and Dolphin Conservation Society, says, “there are…examples of dolphins who appear to be experiencing complex emotions…and it makes a good deal of biological sense that if we have organs very similar to other species then we wouldn’t be the only species on the planet to exhibit emotion.”

In 2012, off the coast of China, a mother bottlenose dolphin was seen carrying her baby on her back–the baby was dead and had clearly suffered significant injuries. Fighting through the waves, the mother dolphin continued to tow her child deeper out to sea. Her insistence on the task at hand suggested to many a deep connection with her young, and may indicate expressions of grief and love. 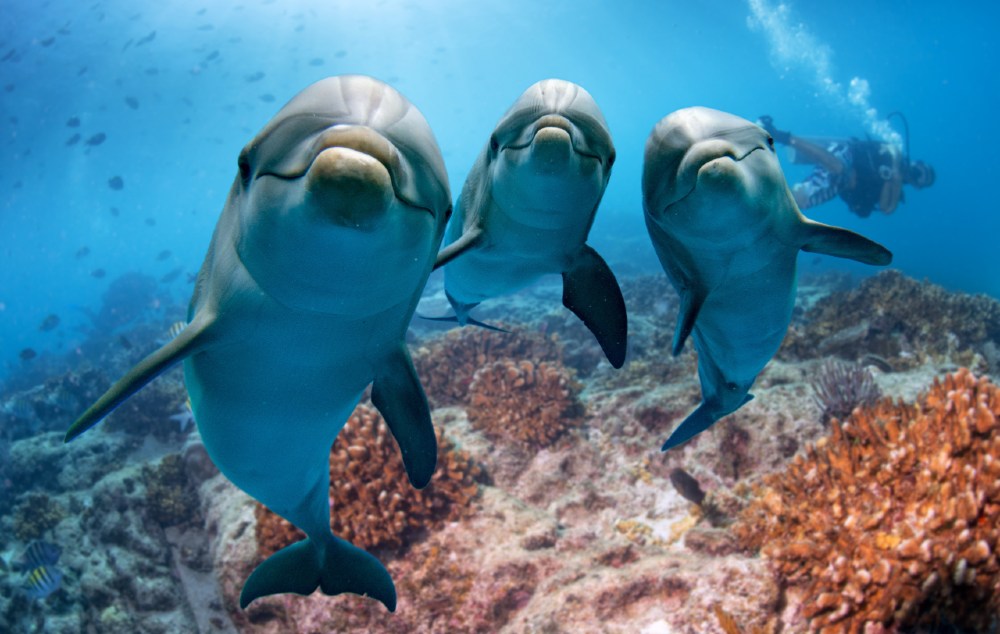 One of the strongest arguments for dolphin emotional capability is supported by research showing the dolphin’s intense need for socialisation. The bottlenose dolphin is a social creature, and they typically travel and live in pods.
As dolphins grow, each one develops its own signature whistle. Communicating through sounds like whistles and squeaks, the signature whistle provides the dolphin with a way to identify itself and to identify his fellow dolphins.

In an experiment conducted by research biologist Joseph Bruck, dolphins were tested to recognise their capacity for long term “social memory”, or how well they remembered other individual dolphins. The experiment exposed dolphins to the signature whistles of dolphins they’d previously been in contact with. When the tested dolphins heard their old friends’ whistles, they reacted strongly, swimming about with vigour and clearly searching for the source of the sound. Time and time again, the research demonstrated the bottlenose dolphins had the ability not only to recognise the signature whistles of their friends (some they hadn’t seen in 20 years), but also that they exhibited an emotional reaction to these sounds. The love and friendship of these dolphin pals is fairly evident. 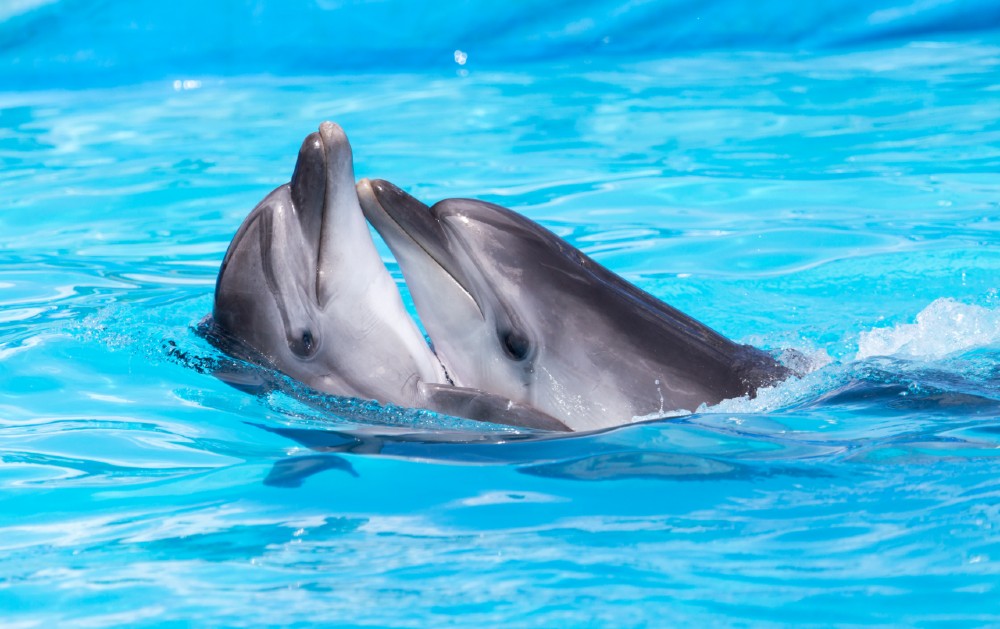 While bottlenose dolphins mate frequently throughout adulthood, this is not a species that mates for life. Perhaps their mating behaviour does not point to what we typically perceive as “love”, but the indication of dolphin friendship and affection certainly demonstrates a capacity for the emotion to some degree. In several surprising instances, dolphins have also shown loving emotions towards humans. The most fascinating of these examples is that of Margaret Howe and the bottlenose dolphin Peter. In the 1970s, Howe was conducting research with Peter in an attempt to teach the dolphin to communicate in English. During this period, the two spent their days together, gradually eating, sleeping, playing, and bathing together. In this isolation, the two formed a remarkable bond which Howe later described as emotional and even “sensual”. In essence, this circumstance demonstrates the ability for a dolphin to become intensely attached, (perhaps even fall in love) with a human.

We know that dolphins are one of the most intelligent mammals on the planet and if they are capable of feeling other emotions then it stands to reason that they also experience grief. There are multitudes of videos online showing dolphins exhibiting grief like behaviour. In the video below a dolphin carries her dead calf around in a heartbreaking display of what can only be described as grief.

However, a recent study analyzing 78 scientific reports from 1970 to 2016 of these kinds of displays was inconclusive. Cetacean biologist Giovanni Bearzi of Dolphin Biology and Conservation in Pordenone, Italy reported that:

“…no matter what we may think these animals are feeling, the question of grief—and of their understanding of death—remains open.”

Another question that often gets raised is whether dolphins are able to sense grief in humans. Writer and journalist Susan Casey, wrote a book, Voice in the Ocean after an encounter with a pod of dolphins while she was grieving the loss of her father.

“Casey and the dolphin looked at each other, exchanging what she describes as “a profound cross-species greeting”. She thought about the grief she was feeling at her father’s death and she wondered if it were possible the dolphins had somehow sensed this. “Did they know?” she says. “Could they tell?”’

Her book, written over 5 years, explores similar encounters and looks at their evolution over millions of years. One thing is certain, the more we learn about dolphins, the more there is to know.

As bottlenose dolphins continue to surprise and amaze us, much more scientific research will be conducted as humans further explore the life, habits, and emotions of this incredible creature. In the meantime, why not come see the dolphins for yourself? On our Jervis Bay Wild dolphin cruise, you can get up close and personal with our resident bottlenose dolphins. There’s nothing like experiencing these beautiful mammals in their natural habitat, and you’ll observe firsthand how friendly and playful they are. Perhaps you’ll even make a friend.

After a day at the beach or out on the water, there's nothing quite like a refreshing drink. Fortunately, the Shoalhaven isn't just ideal for outdoor adventures, it is also known for its thriving food and wine culture. Here are some of the best Shoalhaven wineries and...

END_OF_DOCUMENT_TOKEN_TO_BE_REPLACED

What Is Boom Netting?

At Jervis Bay Wild, we’re famous for our exciting and memorable eco cruises, highlighting the amazing wildlife and spectacular scenery to be found in the waters of Jervis Bay. Our whale watching and dolphin cruises are all very popular options, but perhaps you're...

END_OF_DOCUMENT_TOKEN_TO_BE_REPLACED

Jervis Bay is famous for many things – white sand, crystal clear waters and whale watching to name a few. Jervis Bay is also one of the few places in Australia where you can witness the incredible natural phenomena known as bioluminescence. There have been some...

END_OF_DOCUMENT_TOKEN_TO_BE_REPLACED

How to Spend a Rainy Day in Jervis Bay

Jervis Bay is known for its stunning beaches, mild temperatures and generally sunny climate. But like anywhere, we occasionally get a bit of rain. In an area bursting with outdoor recreation opportunities, will the rain ruin your holiday plans? We say no. Although...